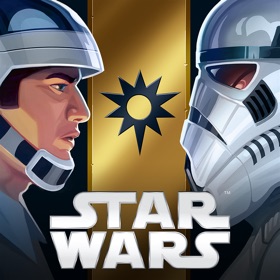 Fight for Your Side. Command The Galaxy.

The Galactic War rages on. Where does your allegiance lie? Will you side with the Rebellion or the Empire? Join the fight, build your base, recruit and train your army, strategically plan your defenses, and lead your troops to victory on war-torn worlds throughout the galaxy!

Battle with or against iconic characters like Darth Vader, Luke Skywalker, Han Solo, and Princess Leia, and utilize or destroy units like AT-ATs, Speeder Bikes, Wookiee Warriors, and Stormtroopers. Join millions around the globe to play in this epic combat strategy game. Commander, the fate of the galaxy is in your hands!

• CHOOSE to fight for the Rebellion or the Empire
• TRAIN your troops to charge into battle
• BUILD units and vehicles with multiple upgrades
• DEFEND your base against enemy forces
• COMPLETE original story missions and gain additional rewards
• LEVEL UP your heroes, troops, vehicles, and more
• BATTLE on different worlds within the Star Wars™ universe
• TEAM UP WITH FRIENDS and allies to form the ultimate squad

Upgrade your Planetary Command building to scout and relocate your base to new worlds such as Dandoran, Yavin 4, Er’Kit and Hoth to expand your command and strengthen your squad.

For the best experience, we recommend playing this game on iPhone 5 or later, iPad 4 or later, running iOS 8.0 and above. iOS versions below 8.0 are no longer supported. Playing on an iPhone 4S may result in longer load times and slower performance.

Additional information:
· The game is free to play; however, in-app purchases are available for additional content and in-game currency.
· Use of this application is governed by Zynga’s Terms of Service, found at www.zynga.com/legal/terms-of-service.
· For information about how Zynga uses personal data, please read our Privacy Policy, found at Privacy Policy - Zynga.
Supported Devices:
- iPhone 5s or newer
- iPod Touch 6G or newer
- iPad Air/Pro or newer
- iPad mini 2 or newer
- work for non-jailbroken and jailbroken devices.

Please enjoy the MOD and don't forget to visit us regularly for new MODs or updates =)
Last edited by a moderator: Oct 15, 2020
Reactions: Maximochka, Yoda284, Pikachu26ev2 and 79 others
G

eager to test this out

@TheArmKing bro everything is perfect but can u do something with gems ? or building time ?

kingseriy said:
@TheArmKing bro everything is perfect but can u do something with gems ? or building time ?
Click to expand...

Not sure, I will try next update
Reactions: kingseriy
K

TheArmKing said:
Not sure, I will try next update
Click to expand...

thanks broski . appreciate it
A

How do you get past the tutorial? The game give me error "Command Failed!" Status 1219 . Can you turn on and off the mod?
K

ACepot said:
How do you get past the tutorial? The game give me error "Command Failed!" Status 1219 . Can you turn on and off the mod?
Click to expand...

play app version and after selecting a side install this version. i had the same problem
L

How to install them on non jail broken iPhone, download directly?

Fantastic mod. Unfortunately, as of this morning, it's now outdated. Looking forward to the update!

thanks but can u do something with gems or building time ? u said u will do in next update ;]
L

Sweet! Can’t wait to get back on here and play some Hacked Star Wars commander. Been getting my butt kicked on the official release since they updated.
C