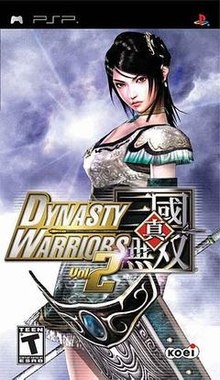 Identical to other Dynasty Warriors games, the game characters and models are all from Dynasty Warriors 5, but it includes new features and some from Dynasty Warriors (PSP), including multiplayer fight up to 4 players and the ability to trade officers wirelessly with other players. In addition, Vol. 2 fixes the HUD problem found in the original Dynasty Warriors PSP title.​
​
Like the previous Dynasty Warriors PSP title, the game features unique characters from the Samurai Warriors series as special bodyguards. In this game, the characters and their models are taken from Samurai Warriors 2.​
​
Unlike the Dynasty Warriors series' console iterations, the map is divided into a grid system. Each grid contains enemy troops that will retreat if their morale bar hits 0. Sometimes it is necessary to defeat the enemy officers before the enemy retreats.​
​
Each stage usually has two winning conditions, each of which will lead to another possible battle stage. In this way, the story can be quite different each time you play.​
​
The player will earn extra officers after each map is completed. More officers can be gained by either completing a certain character's Musou mode, obtaining 100% in a stage or clearing an entire faction's stages 100%. As the player unlocks more and more officers, the player has a very wide range of characters to choose from as subordinates, with both many advantages and costs. The player can only have between 1 and 4 officers in battle at the same time, depending on the rank of the officers. The player earns more officer command points after each level up.​
​
Some officers only cost 1 command point, but some of the more famous officers cost above the 20 command point mark. Some officers also have special skills you can use by choosing the officer with the D-Pad and then pressing Right on the D-Pad. Most effects are similar to the old 'spoils of war' in previous games, such as replenishing the Musou bar or attack up for 30 seconds. The special abilities can be used every time a star is present on the character's name. The star will then turn into a red circle, which is gradually filled with white, until it becomes a star again.​
Free Download :

You know there are also dynasty.warriors 7 for PSP but in Japanes langague also there's Warrior Orochi 3 in japanes language for psp