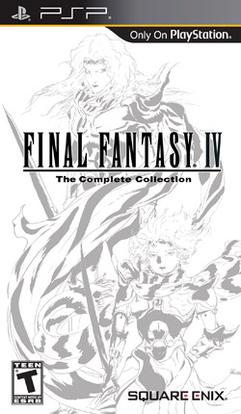 The compilation features the full versions of Final Fantasy IV Advance and Final Fantasy IV: The After Years, along with a new game titled Final Fantasy IV Interlude, which is set roughly one year after the original game.​
​
In Interlude, players take control of Cecil. The story begins at Baron Castle after Cecil has a dream about one of the Crystal Chambers, where he sees Rydia and hears a voice saying "Finally, it has a new form." Just as the voice is about to reveal itself, Rosa wakes him. Cecil and Rosa set off on one of the Red Wings airships for Damcyan. Meanwhile, at the Feymarch, Rydia is about to leave when she is confronted by Asura, Queen of the Feymarch, who asks her where she is going. Rydia tells her she is headed to Damcyan for its reconstruction celebration, and Asura lets her pass.​
​
While at the celebration, a guard enters and tells Yang that some monks have been brutally attacked at Mt. Hobbs. Hearing this, Yang decides to leave, and Cecil and Rosa volunteer to join him. When they get to the summit of Mt. Hobbs, they find two injured monks, whom Rosa heals. Soon after, they are attacked by a Dad Bomb. When they defeat the Dad Bomb they head to Fabul where Yang's wife Sheila is about to give birth to Ursula. Yang asks Cecil to be Ursula's godfather, which he gladly accepts.​
​
As Cecil and Rosa are about to leave they encounter Cid, Luca, Palom and Porom, who tell Cecil a swarm of monsters has emerged from the Sealed Cave. As they are about to take off, Cecil tells Yang to stay with his family. Cid notices that Rosa looks pale and Cecil asks Yang to take care of her while he is away. Once they get to the Sealed Cave, they notice the Tower of Babel pulse with light. Edge notices this as well from Eblan, and sets off to enter the Tower through the underground passageway. Once Cecil and the others reach the Crystal Chamber they are attacked by a Demon Wall and narrowly defeat it. In the Crystal Chamber they encounter Rydia. However, she cannot remember where she was, but she says that "they" were calling her. While everyone wonders exactly who "they" are, the party decides that they should go to the Tower of Babel and investigate.​
​
While they are scaling the tower, Rydia begins regaining her summons and acting more strangely. As they pass the cannon control room, Rydia enters it and three guards come out to stop Cecil and the others from following her. The three guards merge into a Deus Ex Mechina, at which point Edge arrives to lend a hand in defeating it. After the sentry is destroyed, the party head into the control room, but Rydia is nowhere to be found. They decide to keep going up the tower in hopes that they will find her, only to learn that she is an impostor, as she attacks them with the Eidolons she has obtained. When the fake Rydia summons Bahamut, the real Rydia shows up and dissuades him from attacking the party. Although they defeat the fake Rydia, she escapes and reports to her "creator", who is residing in the True Moon, that the Eidolon project is complete. Back on earth, in Cecil's bed chamber, Rosa lies in bed and Cecil asks if she is alright. It is then revealed that Rosa is pregnant. Everyone is overjoyed with the news, and they tell Cecil that he should start coming up with some names.​
​
Meanwhile, on Mt. Ordeals, Kain, who is still repenting for the wrongs he did during Final Fantasy IV, hears a voice call out to him.​
Free Download :