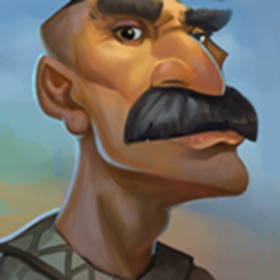 Play it with just one finger!
Simple and instantly addictive gameplay!
The game is for real lazy ones, doesn't require a lot of time: the characters explore dungeons even if you're offline. All you need to do is take your reward from time to time.
The combat mechanics of the PvP competition is unique to games of this genre - collected heroes may be used both for leveling and for building arena squads to compete against other players in various competitions.

Key features of the game:
- Over 150 unique characters.
- Clans and their development.
- 8 science trees with over 100 different skills.
- Unique PvP combat mechanics.
- Loot equipment from monsters
- Craft new items with 1000's of recipes
- Over 60 special artifacts.
- Battles with hundreds of different monsters.
- PvP-mode against other players.
- More than 10 amazing locations.
- More than 10000 levels.
- 9 powerful skills to be used in combat.
- System of daily tasks, quests and other objectives.

Please read this first! Apple changed something on the certification system which is causing problems for people without a developer account to install non JB mods via Cydia Impactor. That tool is made by Saurik and there is nothing we can do. We just can hope, that Saurik updates the Cydia...

Please enjoy the MOD and don't forget to visit us regularly for new MODs or updates =)
Last edited: Apr 16, 2020
Reactions: Trevuad, Actnzt, Theguardians and 27 others

New update just came out today please let me know if you ca. Get this updated thanks boss

Thx for r work
TheArmKing
but how to isntall Ipa file.Cydia impactor not working :(
K

TheArmKing
Game crashed when start like iosgods app.I installed it with alstore.