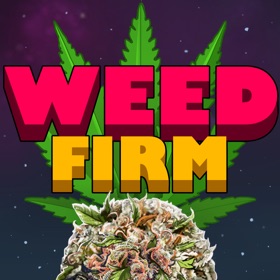 Weed Firm 2: Back to College by Manitoba Games.

The sequel to the now-legendary weed growing adventure, Weed Firm: RePlanted, featuring the next level in weed selling simulations.

In this plant game you will:
• Cultivate your pot farm empire with multiple strains of marijuana, including the well-known White Widow and Purple Haze, as well as the amazingly potent and extremely beautiful Alien Weed
• Meet and sell pot to a range of eccentric clientele such as Jane the stripper, Luni & Durte the rap duo, Sandy & Mandy the Cheerleaders, Ian the DJ, Rasta Bob, a crew of weed loving aliens, and many more!
• Grow your pot farm empire and customize your shop with a series of items that will help kick up your buzz as well as keep you safe from intruders
• Defend your stash from the local Gangbangers and find creative ways of shaking off corrupt cops and federal agents who are ready to bust up your grow shop.
• Expand your operation to the great outdoors and beyond. What will you find inside the RV? Diversify your business with blunts, rosin dabs, wax, and a variety of edibles!
• Earth is not enough for your booming business? Procure a spaceship and open shop in the Space Bar, where you can produce and sell high profit concentrates to a new crowd of visiting aliens!
• Now you can mine weed crypto coins to unlock exclusive content!
• Featuring Soulja Boy: Drako is back!
• A new addictive way of gaining XP: basketball minigame!

In this follow-up to Weed Firm: RePlanted, the popular role-playing weed growing and dealing adventure, expelled botany student Ted Growing heads back to his Alma Mater. This time he's not there to hit the books, but rather to hide out from the cops who are hot on his trail. Ted sets up his pot grow-op in an abandoned gym and gets down to doing what he does best: cultivating and selling cannabis. You get to be Ted as he expands his pot farm! Feel your pulse rising as Ted tries to keep his buzz up while growing his empire and selling to an ever-increasing client base that demands R-E-S-P-E-C-T.

If the hack does not work close and try again a few times. Something with substrate/substitute does not allow this mod to start up right away so please close your game and try it again until it kicks in ENJOY!!!

Please enjoy the MOD and don't forget to visit us regularly for new MODs or updates =)
Last edited by a moderator: Nov 7, 2021
Reactions: Bababou789, Yuqtue, FTVoid and 343 others

thank you!!!
Reactions: JxstVIX and Nto97
A

how are you the only one that says it dont work and for everyone else it does
Reactions: RxquestGump31
J