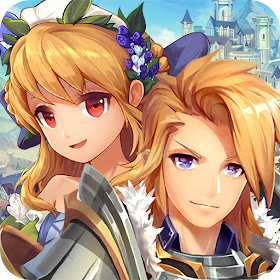 During the casual tactical battle, your guardian knight heroes will lead their respective troop classes in the battle formations you assigned. Each hero also has two primary skills. An Active skill that you can control the timing and another Autocast skill that will auto-activate periodically during battle.
Develop your royal home castle, defeat epic bosses, make/join a clan, and save the kingdom from chaos! Royal Knight Tales is the new anime RPG game with casual MMO gameplay from the creators of the highly acclaimed Sword Fantasy Online. A lot of effort went into making this game, we are happy to have long-term players who enjoy the game, so many gems, summons, and other rewards can be gained by playing daily.

We don't open new servers frequently, so just play on the newest one, and no worries.

You can recruit dozens of chibi girl knight heroes in this fantasy RPG. Each knight has their own set of skills, class, and retinue troops. Heroes can be recruited by completing Elite Stages, friend gacha and elite gacha summon. Every character is beautifully drawn in high-quality anime style, if your love anime or chibi cartoon art style, this is a must-try!

Each knight hero in the chronicle has their unique retinue troops. Those loyal chibi soldiers will follow and fight alongside their heroes. Mage heroes will have spellcasters as troops, rider heroes will have knight troops, and flying heroes can even have dragon rider troops! In addition, troops can be upgraded and evolved, initially, that chibi Flying Horse Riders could evolve into Flying Crusaders or even magnificent Dragon Riders based on your choice!

Use class countering and formation to tactically battle your enemies in the chronicle. Mounted riders might be able to charge down the sword and shield foot soldiers but spear soldiers can effectively counter them. Mages hiding behind the enemy formation can cause havoc to your troops if left unchecked, best use Flyers to swoop in and charge them down. All done in anime chibi style!

You can join a clan like in MMO RPG and earn great rewards through clan events daily. Co-op with other players to defeat clan bosses and earn weekly gifts. Clans can take over island castles in the weekly Skyland Wars and earn many rewards! Last but not the least, you are encouraged to chat with other players in the world chat or clan chat, please be civil though.

As in Sword Fantasy Online, this chronicle fantasy RPG game is very rewarding to play every day. There are plenty of ways to earn Gems daily, the first time you clear a stage, from daily quests, login rewards etc. Login in to play every day is the way to advance fast! We believe players will naturally top-up to support a game they love.
*MOD Preview*


NOTES:
1. If you forget to install the OBB files the game will start fine but you will receive a packet error on login. It is important to have them placed correct. Download the obb zip, unzip it and move the folder "com.elysium.royal.knight.tales.anime.rpg.mmo.gacha.impact" with the file inside to your "Android/obb" directory in your internal storage.

2. For the case you do not get exp, gold or other awards displayed after battle please do not worry. That's a visual glitch of the game. You will still receive them. You can fix that with a simple restart of the game.

You want this awesome MOD together with many other games and perks? Get VIP here: