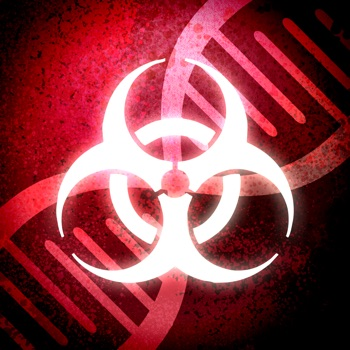 Can you infect the world? Plague Inc. is a unique combination of deep strategy and terrifically realistic simulation.

Your pathogen has just infected "Patient zero". Now you must eradicate humanity by evolving a deadly virus on the planet while adapting it to counter whatever human beings will do to defend themselves.

With a brilliant realization, this innovative game has been entirely designed for iPhone & iPad, Plague Inc. is evolving the strategy genre and pushing the nomadic game (and you) to its limits. It's you against the world, only the strongest will survive!

Plague Inc. is an international 5 star hit by over half a million people cited in newspaper articles such as The Economist, The New York Post, The Boston Herald, The Guardian and London Metro!

The developers of Plague Inc. were invited to speak at the CDC in Atlanta on Epidemiology in the Game!

"Plague Inc. is going to capture your attention in a good way, and keep it" - Touch Arcade

"It is undeniable that Plague Inc. presents a high level of quality" - Modojo

"Plague Inc. is not allowed to be that much fun" - London Metro ► "It will make you want to destroy the world, just for a little fun" Pocket Lint

"The game in Plague Inc. gameplay is contagious" - Slide to Play

"Killing by the billions has never been so fun" - IGN

More than 50 countries to infect, hundreds of traits to evolve and thousands of planetary events to adapt to (pandemic evolution)

Full support for leaderboards and achievements

Expansion adding the Neurax Worm which controls spirits, the Necroa virus which produces zombies, the race mode and scripts taken from real life!

One color per switch

This is to let you know that starting Monday, I'm back to work!

I managed to get a new device that is jailbreak compatible (iPhone X).

Mods that have not been updated can be updated from Monday.

Sorry again for this long inconvenience, wishing you a good day and see you soon!
Z

thank you for your sharing
D